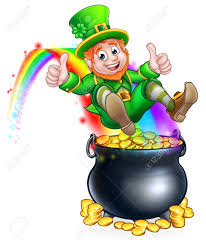 With St. Patrick’s Day fast approaching, we thought it would be interesting to explore the history of the holiday. We’ve come to know March 17th as the day you wear green to avoid being pinched by your peers… kind of a weird tradition when you think about it. However, the history behind the actual person St. Patrick is far deeper than plastic shamrock necklaces, tiny red-headed leprechauns, and cheap pots of chocolate gold coins.

Actually, St. Patrick was a patron saint of Ireland during the 5th century. He was born in Roman Britain but was captured when he was 16 and taken to Ireland to be a slave. He eventually escaped but returned to Ireland around 432 A.D. to convert the country’s residents to Christianity. During his lifetime, he established monasteries, churches, and schools. According to legend, he used the shamrock to demonstrate the Holy Trinity- God the Father, God the Son, and God the Holy Spirit- explaining the plant’s association with the holiday. St. Patrick died on March 17, 461, and the Irish came to celebrate his life and religious contributions to their country on that day. Originally, they celebrated with religious services and feasts.

It wasn’t until Irish immigrants came to the United States and transformed St. Patrick’s Day into a celebration of all things Irish that it was observed here. The cities with large numbers of Irish immigrants held the most elaborate festivities, including parades and lots of drinking. Actual residents of Ireland did eventually adopt some of the practices we associate with the holiday, but they did so mainly to benefit tourism.

Now that you know the REAL history behind St. Patrick’s Day, we hope you see March 17th as more than just the day you wear a “Kiss me, I’m Irish” shirt!